As opening day for the exhibition at the Croatian Cultural Center of Greater Los Angeles approaches, I still have a lot to do.  And every time one thing gets completed, something else seems interesting to add.  One thing we recently added is window clings that will be used at the show.  The show is intended to be interactive, and I really hope people will use these to block off whichever portions of the images they find offensive.  Just because I like you, here's what one of those looks like:

People close to me liked it so much that we are making some shirts to go along with it.  We hope to have both for sale at the show, or by request.  The initial intent, however, was to allow people to use them on the artwork, to make their own statement.

NEW STUFF ADDED JULY 26th: WE WILL ALSO HAVE Rebecca Lynn IN THE HOUSE ON AUGUST 3, AND THE PAINTINGS OF Diana Hemmings, AS WELL AS THE PHOTOGRAPHY OF Diana Oliva LATER IN THE RUN OF THE SHOW. WE HAVE NOW RECEIVED THE FIRST LOT OF THE REAL T-SHIRTS (FROM Think Your T-Shirt) AS WELL, AND THEY ARE MUCH BETTER THAN THE PREVIOUS ONES, EVEN THOUGH LESS EXPENSIVE.

Although I am not showing very much of that work in the usual online locations before the show closes, here's an example of what I have in mind (although I would personally put the cling on a different image that may be shown alongside this one). 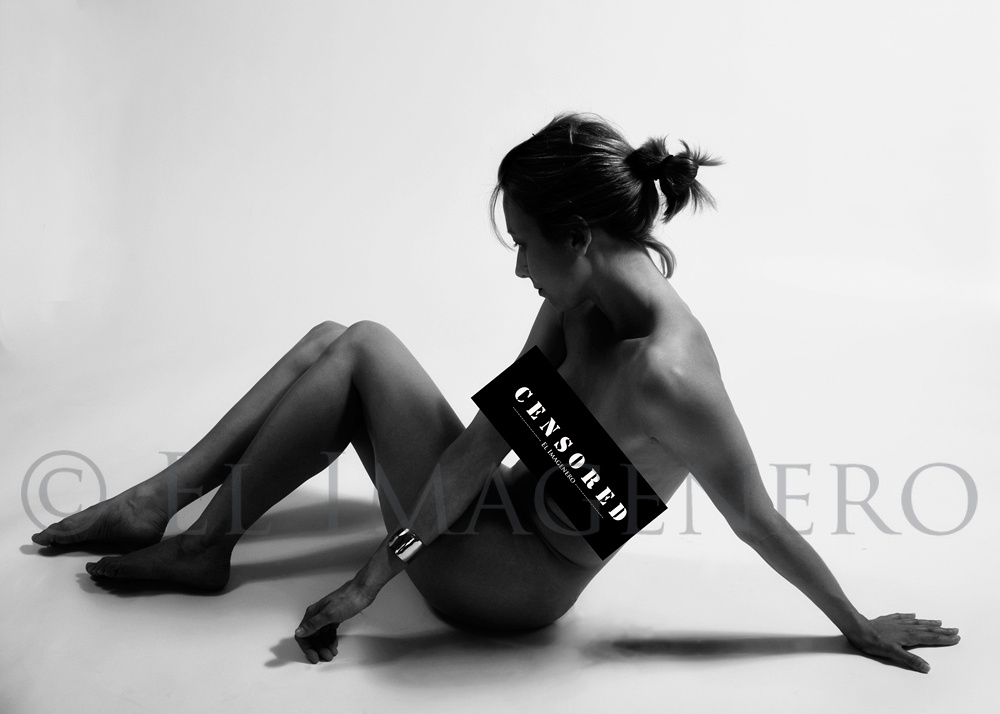 This exhibition is one of a series of exhibitions in 2014 at the Croatian Cultural Center under the title "Art Without Boundaries."

I am very happy to tell you that the very first co-exhibitor will be Andrea Patrie.  I have loved her work for quite a while and earlier this year bought two pieces for my own collection.  Her paintings are generally figurative, frequently somewhat abstract, and always visually powerful.  Check out her website, linked above, and her Facebook page.

In addition, we have a solid commitment from Sean DuFrene, who teaches at the Art Institute of California, to speak on art, photography, and life as he finds it, on August 9.  Mr. DuFrene will also exhibit prints of several of his own photographs on August 9 and 10.

In addition to preparing this show, I recently attended my nephew's wedding, and made a few snapshots of people while I was there.  Thankfully I was NOT the wedding photographer, so I got to relax, enjoy, and make more interesting images of the festivities and personalities.  A few of those are here: My brother looking mighty skeptical about something the groom is telling him. The happy couple in a shower of bird seed.

Looking forward to hearing from you, and to seeing many of you at summer events, including the show at the Croatian Cultural Center of Greater Los Angeles, in San Pedro from August 3 to August 31, 2014.

bob Killne(non-registered)
I finally came up for air and had tome to review this post and fell in love with the wedding images.
No comments posted.
Loading...