Thank you for your patience while we retrieve your images.

Home»All Photographs»Conceptual»What we Censor, What we Don't

11 photos
Guiding Principle: Laws are mere codification of “Community Standards.” They are what we collectively decide or allow our standards to be.

Overall Objective
The objective is to question where these standards are coming from, and what they are really trying to accomplish. The show at the Croatian Cultural Center of Greater Los Angeles was very well received by hundreds of guests as well as at least one newspaper review. I learned some things from the visitors, including that virtually everyone agrees with me, and DISAGREES with what is supposedly our "community standard." So, whose community is it?

A second, but not secondary, objective is to invite a viewer to determine what is objectionable. Our society censors images of the nude human body, which is entirely natural, but lionizes and even laughs at violence and threats of violence. Is this in any way sensible?

The Work is Intended to be, and was originally shown, as interactive works, in two Parts:

PART ONE: large prints of images that include something that is absolutely prohibited on broadcast television, Facebook, Instagram or Google+, and something else that anyone can see virtually any day or night on any television or social media platform. These were printed 48 inches wide with"CENSORED" signs that could be placed where an individual found something objectionable.

Viewers were ENCOURAGED to find one of the window clings to mark something on each of the images that the viewer believed might be frightening or harmful to children and mark it.

Versions of the original PART ONE images are on this page below.

Some of those images are included in the blog posts linked below, many of them are in other galleries on this web site, and you can buy your very own prints of those dangerous images!

Some Blog Posts Relating to the Show:
Entertainment and Danger

Reflections on the Opening Day 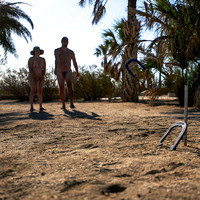 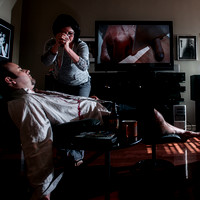 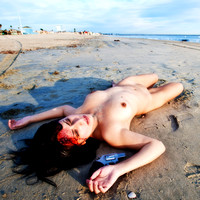